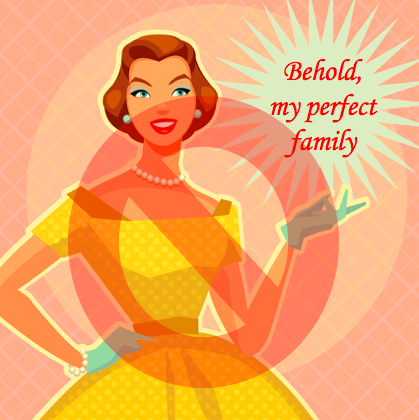 Angelina Jolie was recently quoted in Vanity Fair as saying that she does her crying in the shower during tough times, so as to protect the kids from seeing her weak moments. She’s apparently a much better mom than I am. But I’m okay with that.

I’m writing this on the plane from Bergen, Norway to Copenhagen on August 2. We’ve visited London, Ireland and Norway so far (more on Norway later), and in three hours it will have been exactly two weeks since we left. It feels like months. And not in a good way. LOL

It’s now clear that many of those other round-the-world travel blogs we have been reading over the years – especially the ones written by parents traveling with children – have been Fakebooking it. I know you’re with me on this …written the way people often write their Facebook posts and portray their lives in photos…sharing only the good parts, making global travel sound like a serene walk in the park…Total perfection, with no complications. Every day is bliss, particularly with their kids – happy little munchkins biting at the bit to consume all of the culture and historical significance of each locale they’re visiting, eagerly gliding through museums and tourist attractions with wide-eyed interest and an insatiable craving for historical tidbits while they unconsciously absorb the local language and two school grades worth of facts and analytical skills. The kids implore, “Please, Mom. Take my electronic devices away from me. I just want to drink in my surroundings and people watch.” Oh, and then they go home and fill their journals to the brim with various, deep analyses and reflections on the day.

As my girls would say, “Bruh. Seriously?”

Call me the Erma Bombeck of global family travel, but I’m here to set the record straight.

What those other blogs omit is R.E.A.L.I.T.Y. What they don’t talk about is the tears, the tantrums and hissy fits, the bickering, all of the yelling, anxiety, raw fatigue and the flat-out exasperation.

And that’s just the adults.

With kids, it’s more like the way comedian Dana Carvey describes his European vacation with his teenage son in his latest stand-up special on HBO (hilarious show, BTW). They’re standing at the Colosseum in Rome. Carvey and his wife are marveling at the massive structure and imagining life at that time, feeling nothing but awe for the historical significance, the millennia that have since passed, and all that’s happened in between. Then (in teenage boy slo-mo stoner drawl) his son chimes in with, “Uhhhhhh, sooooooo, liiiiiike…is this allllllllllllll we’re going to dooooo today?” (10-second pause) “I’m borrrrrrred.”

I’m using the all-inclusive “we,” because I know it’s not just my kids. That point was mercifully driven home by a mom from our school who we happened to run into at Harry Potter Studios in London (yes, such a small world!). This is the third time this woman has popped into my life like a guardian angel to prop me up with direct or indirect reassurances that my family is normal, and it will all be ok. This time, we ran into her during our very bumpy first week of sleep deprivation and associated erratic emotions. Rather than surprised and elated greetings at our inadvertent reunion, she acknowledged me with the same exhausted groan we’ve given each other on many a harried morning in the school parking lot after barely beating the school bell. Now here at Harry Potter Studios, she rolled her eyes, looking ready to collapse, and groused about how her day was going – indifferent grunts from her 12-year-old and nonstop whining from her seven-year-old. Oh, how I could relate.

I practically dropped to my knees in worshipful bows of gratitude. Think Wayne’s World “we’re not worthy” bows. Outwardly I offered comfort. Inwardly I was enormously relieved to see that other families, marvelous families with terrific kids, also have these challenges on the road. She and I commiserated and then slogged on in our separate directions, happy to have found a cohort in each other. We crossed paths again later while enjoying the Butterbeer, when the tide had turned for both of us. She cheerfully jumped in to take a beaming family photo, capturing one of our we’re-all-happy-at-the-same-time moments as we offered up a toast to JK Rowling for bringing Harry Potter into the world. 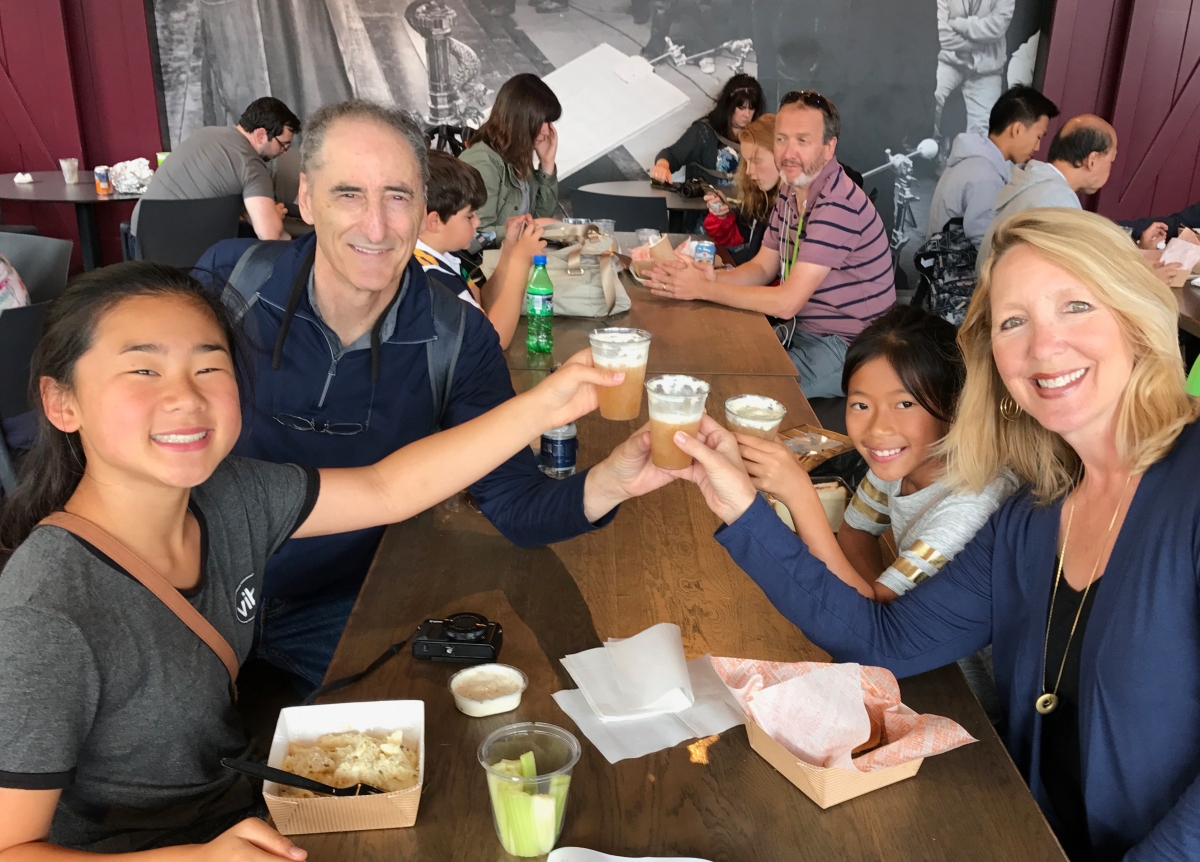 I’m pleased to say that things are much better now that the jet lag is mostly over and we finally learned our lesson about slowing it down. But there was one point in Dublin when I hit bottom. We had endured one snafu after another in Ireland and it had been a particularly rocky day of complaints and general misery about the prospect of being gone for a year. My youngest was mad at me for some reason even she didn’t know. My oldest would ring out at two-minute intervals with, “I miss my friends. I miss my friends. I miss my friends.” And my husband was…well let’s just say he was in a state. I was tired, too, and had maxed out on being the optimistic Olaf of our trip so far. “Woo-hoo! Here we are at the Cliffs of Moher in pouring rain and blinding fog – I’m sure they’re beautiful!! Totally worth the stressful, winding drive on the wrong side of narrow roads to not see them, right guys!!??”

After two-plus days of this, we were now on the River Liffey footpath right in the center of Dublin, and one of the family said something that sent me careening over the guard rail of motherly stoicism into the canyon of parental despair, fearing this year of adventure just wasn’t going to be worth the price we’d have to pay in our sanity.

Being the mature adult and consummate, crisis-handling professional that I am, I stopped in my tracks and started to cry. No hiding in the shower for me. Finally motioning for them to walk on, I had to take a Mommy Time Out. I just sat on a bench staring at the water in tears wondering, “What in the hell have we done to our kids? Are we ruining their lives with this pipe dream of a trip?” My clinical, risk-management brain kicked in, weighing what would be involved in terminating the mission. Then my ridiculous, practical ego kicked in, realizing how fortuitous it was that I still had not had time to assemble an email blast to tell all of our friends and family what we’re doing. I rolled it over in my head. Yes, it would be a little embarrassing to go back home, but at least not everyone knew about the trip yet.  And even if they did, it wasn’t worth torturing our miserable kids just to save face. “Sorry, kids. We told everyone we were taking this trip, so dammit, we’re taking it! And you’re gonna enjoy it, you little boogers, whether you like it or not!” Uh. No.

After about 30 minutes of wallowing in my personal pity party, the emotional clouds parted, and the sun came out, because up walked my husband and kids with a bounce in their step and in great spirits, rolling a new, lighter suitcase that would alleviate one of our big packing headaches. God bless that man. Apparently they had collectively hit the reset button and all was well again. I jumped up, dried my eyes, and cheerfully accompanied them back to the store, because as they insisted, I had to see what the other options were. All of the angst was in the past, and life was good again as we happily debated suitcase alternatives at the store and settled on not one but two new suitcase replacements. By late afternoon we had left our old suitcases up for grabs by the hotel staff and were en route to Norway to meet up with friends.

So yes, unlike other travel bloggers, I promise not to Fakebook it. As has been the case so far, you’ll get the good, the bad and the ugly. So strap on your seatbelts and pull down your lap bars. It’s going to be a rollicking rollercoaster year for all of us, I think.

12 thoughts on “Angelina Jolie May Hide Her Mommy Crying in the Shower, But I Sure Don’t”