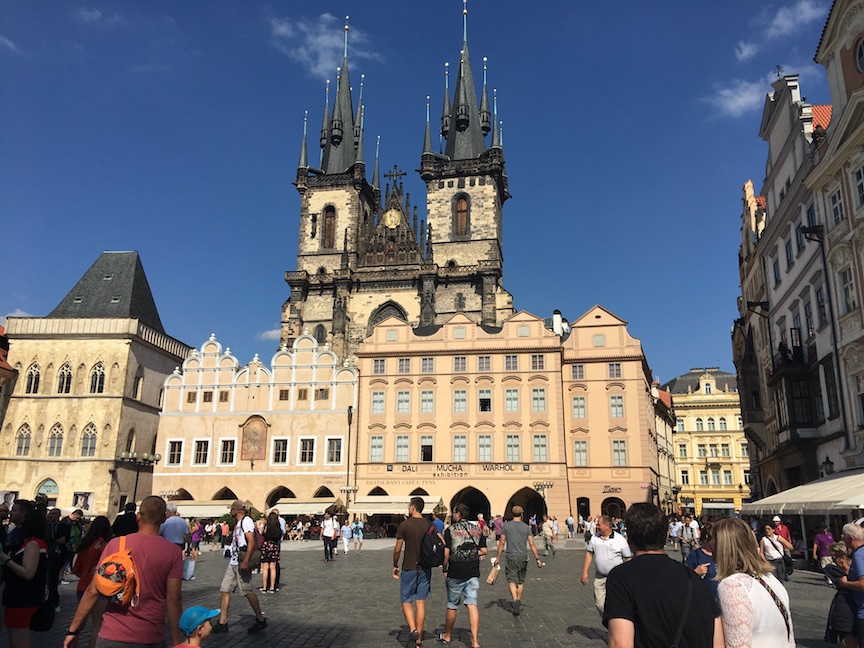 The family is starting to give me a hard time for being so many cities behind in my “reporting” (ten, to be exact)…don’t worry, though, I’ll catch up.

After hearing numerous relatives and friends rave about Prague, it was on the bucket list. Well, what they said is true…Prague is magical, no question.  And downright gorgeous. Like other European cities, it’s quite ancient. With many original structures still intact, it offers a glimpse into the past.

But I should begin our Prague story at the Copenhagen airport.

It was there, after a ridiculously long schlep down what seemed to be an abandoned concourse, that we found our ground-level gate, laid eyes on the plane we’d be boarding, and just about turned around. We weren’t the only gawkers, because I heard audible gasps from a few other passengers who, like us, then proceeded to take pictures for evidence in case our iPhones survived the crash. Think Soviet-era prop plane.

One thing about a trip like this is that you find yourself on all kinds of airlines you’ve never heard of. Like Czech Airlines. We always look at the safety record before booking, but still…Leap. Of. Faith.

The aircraft was surprisingly nice on the inside, but word must have gotten out about the American family on board, because I kid you not, the front half of the plane was completely empty except for the four of us. All the other passengers were seated in the nearly-full back half of the plane. Or perhaps they knew something we didn’t about which part of the plane best handles a catastrophic landing?

Fortunately, all went well. Our Airbnb host who, with less than 24 hours’ notice of our booking, graciously spent her entire first day back from her own vacation feverishly cleaning her apartment for our arrival, greeted us with warm hospitality and marvelous English. We had chosen to stay in the “Art District,” a rebranding of a mixed-bag industrial/residential area across the river and off the tourist path but still an easy walk to all of the sites. Her family of four was in the midst of a pay-as-you-go renovation of their loft space in a very old building. It had huge windows, movable walls, and all of the family possessions that make a house a home. It also came with a bunny rabbit (optional).

The bunny ate things. Anything. If an item was left on the floor, it was fair game. My husband did not take to the bunny.

The girls, on the other hand, loved the bunny. Castles? Meh. Bunnies? Yeah! He was a major source of entertainment and possibly a highlight of Prague for them. 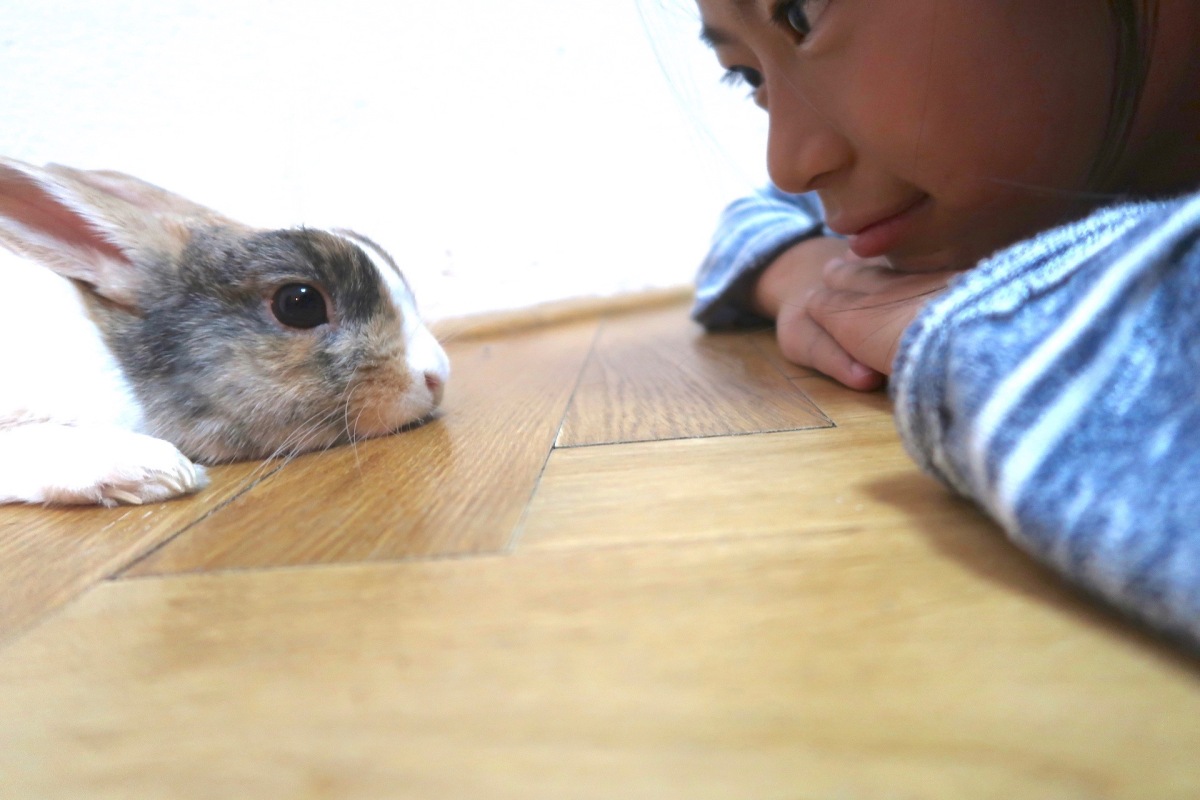 So it kind of felt like we were living in Prague rather than visiting, even if just for a week or so (August 7-15).

The time passed quickly. We did a lot of sightseeing, walking almost everywhere.

It was still peak season, and the place was bustling. We walked Na Příkopě (the pedestrian mall), Wenceslas Square (site of numerous country-altering protests), and through Old Town Prague and across the Charles Bridge, with all of its statues. 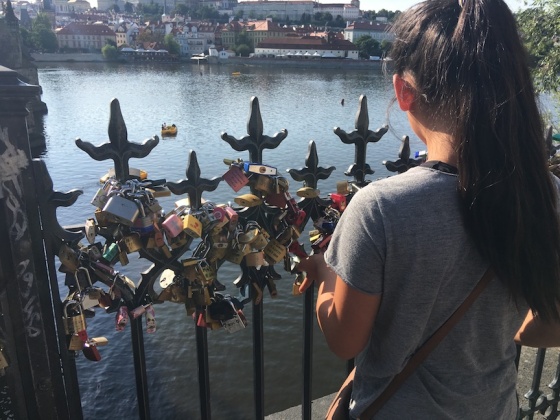 We also took a Vltava River cruise, which is a fabulous way to see the city. 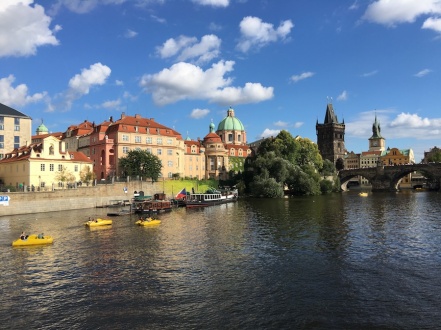 The kids tried Trdelník (aka “chimney cakes”), which are large hollow pastries shaped like round chimneys, roasted on a rotating spit over a fire and filled with chocolate, caramel, ice cream, etc. 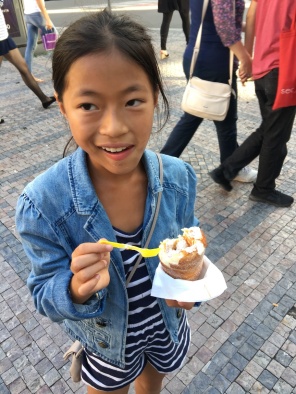 And we had a few fabulous, classic Czech meals at our neighborhood restaurants.

There was the usual kid griping about the heat, the “boring” sightseeing, and the walking; but there was also plenty of enthusiasm when defenses were down.

Parental Aside: I’m starting to suspect that tweens/teens have two brains when traveling. There is the brain with a DISENGAGE default switch that is uninterested in anything non-electronic and that resists all activities initiated by a parent. That’s the conscious brain with a language center. And that language center makes itself heard aplenty (“I’m bored.” “Do we have to go sightseeing today?” “I’m hot.” “I’m hungry.” “Why are we here?” “I miss my friends.” “All of this family togetherness is detrimental to my personal development. Research it. It can’t be healthy.”)

But I believe I’m also seeing signs of a secret second brain that comes along for the ride but silently hides behind the skull, hair and Apple ear buds so as to not be lobotomized by the ever-vigilant tween/teen protecting their God-given right to be miserable. We’ll call this the Absorption brain. Unbeknownst to the unsuspecting kid, it actually takes in historical and cultural tidbits, processes them and stores them for future reference. It lacks a language center but does offer a pleasure center, which surreptitiously delivers short blasts of joy when the kid isn’t looking. Involuntary muscle spasms cause heads to turn, photos to be snapped and fingers to point. The science is thus far inconclusive, but anecdotal evidence shows that this brain does indeed exist. Let’s hope.

One form of self-entertainment is funny-face photobombing. Constantly. 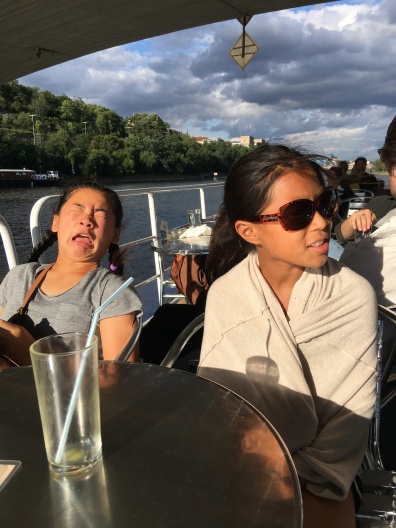 We adults were having fun, regardless. Out of sheer, morbid curiosity I had my eye on visiting the Museum of Medieval Torture Devices, which was really out of character for me, the one who can’t watch a horror flick without first reading the plot to know what’s going to happen. It sounded like a fun, Ripley’s-Believe-It-Or-Not novelty. However, after looking online one night and having to wash the creepy crawlies off of me in a bath of undiluted chlorine bleach, I took that particular museum off the list.

Little did I know what was in store at Prague Castle.

We visited the castle in the pouring, body-drenching rain. The good news is that hardly anyone else was that stupid, so we practically had it to ourselves. Normally, it’s more packed than your local mall at Christmas time, which we saw when we returned the next day (sans rain) for the hilltop views. 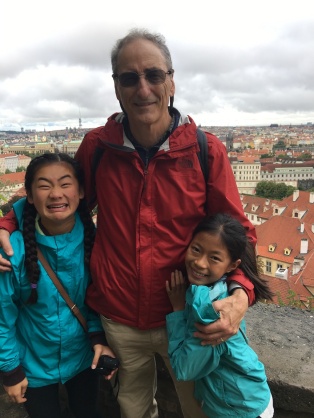 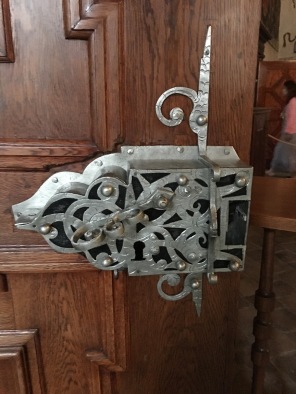 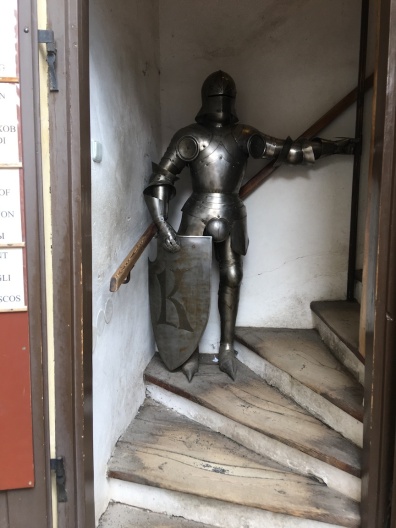 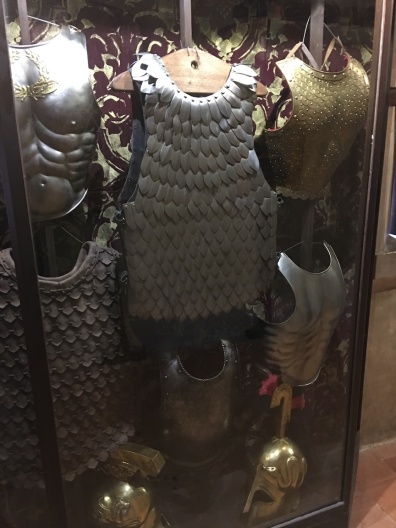 Prague “Castle” is actually a walled mini-city with numerous buildings; a stunning cathedral; a cute mini-village that looks like it was built for the Land of Oz’s munchkins but that was occupied by average human beings; a fantastic display of suits of armor as they evolved over time; and a medieval prison. Yes, a real prison. With medieval torture devices. On display. And in case you can’t quite picture how the body cages were used, they  include skeletons for your viewing pleasure. 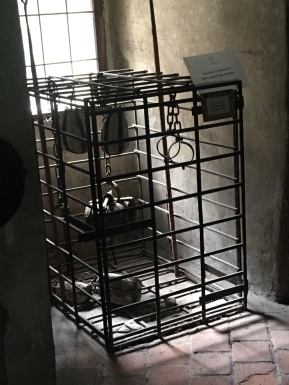 Gawd, they were sadistic back then. That’s what the founding fathers must have meant by “no cruel and unusual punishment.”

We by no means covered all of what Prague had to offer. During our eight days, we had plenty of down time and some school lessons. But here were a few of the kids’ (and our) favorite sites/activities, if you ever go:

And do try a chimney cake.

Next: How We Took a Bath in Budapest and Lived to Tell About It

6 thoughts on “Prague, Medieval Torture Devices, and a Bunny Rabbit”