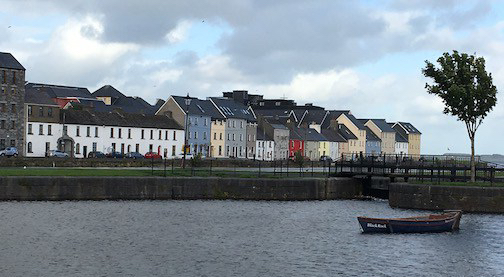 As I mentioned, my earnest husband had put heart and soul into planning a whirlwind three-and-half-day Ireland tour, July 25-28. However, given the trials and tribulations of our first day there and limping through a late breakfast the next morning, we quickly realized we would have to scrap the original plan and regroup. Rather than endure a full day in the car to visit the Ring of Kerry and other dramatic coastal sites, we conferred with our hosts, reluctantly crossed that off the list, and rerouted to the historic, seaside town of Galway about an hour from our B&B.

Before hitting the sites, we had to take care of some errands, which put us into the thick of Galway traffic and a large, confusing shopping center. There’s just nothing more fun than traveling halfway around the world to flounder your way in and out of the wrong turn lanes, get honked at, and drive around in circles. Bolstered by post-errand ice cream, we dove in.

It took us about an hour to go two miles to the central tourist area, but we finally pulled into a parking lot just in time for an astonishing, torrential downpour and hailstorm that enveloped the car. I was fully expecting to see a pock-marked car afterwards and suddenly wished we had read the fine print in our rental car insurance.  You have to see it on video, and even that doesn’t fully capture the noise and buckets-per-second of water flooding the area. Just when we were starting to suspect that Murphy’s Law had followed us to Galway as well, the deluge subsided to a steady rain and we were able to finally venture out of the car armed with slickers and an utterly useless umbrella. We then realized Murphy had stayed behind that day, because our timing had actually been perfect. Had one of our daughters not dragged her heels putting her shoes back on, we would have been out of the car, down the street and completely drenched.

Another bit of good luck is that there was a man, the only person in sight, pulling out of a secured area who had stopped to lock the chain across its driveway. Having no clue as to where we were or what there was to do, we stopped him for basic directions. Jackpot! It turned out that he was an economic development officer for Galway who happened to have a tourist map on him and was chalk full of information and advice about this lovely town. He was your quintessential charming Irishman – so friendly and warm, standing there in the rain to educate us on his special city.

He beamed with pride in Galway as he regaled us with trivia about the city and its similarities to Silicon Valley. The New York Times calls it Ireland’s most charming city. It features a university, a darling historic area that was almost demolished and then saved, and an economy that is resurrecting itself after the global economic downturn that hit its outsourcing sector quite hard. Our enthusiastic ambassador shared that many executives on temporary assignment from foreign companies decide to never leave. Apparently, Galway is known for its progressive culture and its embrace of innovation and diversity. 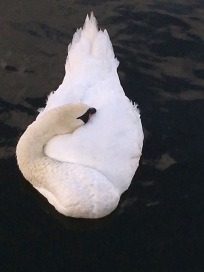 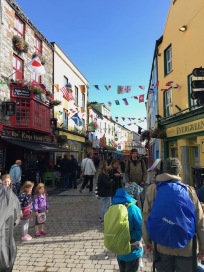 We enjoyed the historic area, had a nice dinner and walked all around the waterfront. We enjoyed the serenity of dozens of sleeping swans, the energy of numerous after-work rugby games, and the thrill of some incredible kite surfing where a jetty kept the water on the leeward smooth despite 25-knot winds pounding the water on the windward side. It was mesmerizing to watch the boards zipping through the glassy water and then see strong puffs carry the riders some 30 feet into the air. Walking back through the historic area toward our car, we took in some of the marvelous street music before finally tearing ourselves away to drive back.

The next day we lingered over breakfast with our hosts for an interesting conversation about U.S. and Irish politics, business, and culture before heading to Dublin for one night. Our drive across the country was beautiful, mostly featuring stone walls that were thousands of years old, lots of cows and an endless, rolling green countryside.

Arriving in Dublin late in the day, we were thrilled with the apartment we had rented and highly recommend it for convenience and comfort (Staycity Aparthotels Dublin). We walked around a bit to explore Christ Church Cathedral (dating back to 1030), marvel at the stunning gothic architecture of Trinity College (ranked in top 1% of universities worldwide), take in a game of cricket briefly, have dinner and got to bed at a decent hour. 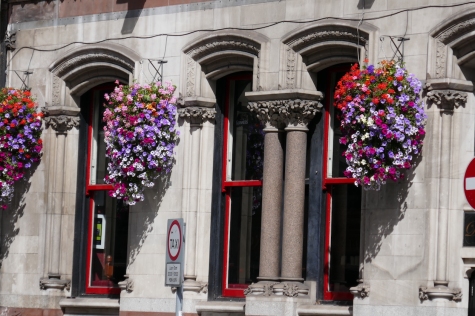 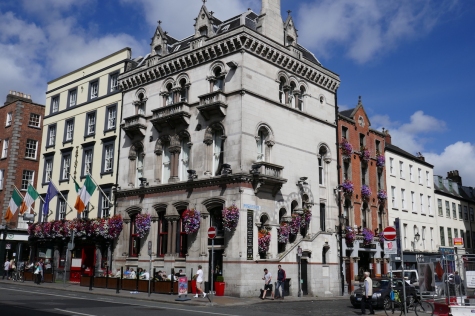 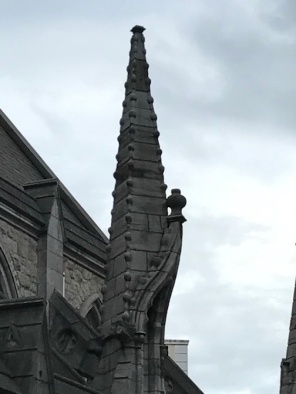 The next day, my husband and one daughter also took a tour to see the spectacular Book of Kells at Trinity College Library.

We had been on a two-day up portion of the rollercoaster. Alas, the next day held in store a what-was-I-thinking, double loop-the-loop, which I’ll describe in my next post, “Angelina Jolie May Hide Her Mommy Crying in the Shower, But I Sure Don’t.”