I’m way behind in summarizing what we’ve been up to for the first 2-1/2 weeks of our trip, so here is an attempt to catch up…

Our big mistake with this leg of the trip was forgetting that it was supposed to be our “shakeout cruise,” where we’d just focus on getting acclimated to the time zone and our new normal as digital nomads, take care of some logistics, and work out any kinks in our planning (of which there were some biggies). But let’s take it from the top…

Not knowing how the kids would handle the long flight to London (okay, let’s be honest…not knowing how I would handle the long flight to London in coach after so many years of being spoiled by international business class for work…), we decided to break up the trip with a layover at JFK. From there it was an easy hop to Heathrow on a few hours’ sleep, landing in the morning and checking into an airport hotel for a half day to get breakfast and break the cardinal rule of getting over jet lag by taking a short nap. From there we took a cab to our marvelous Airbnb apartment in the Maida Vale section of London and settled in.

We had taken a chance, because this was a new Airbnb listing with no reviews when we booked it, but it turned out to be a terrific little find at a great price by London standards. Maida Vale is a leafy-green, very quiet, upscale neighborhood. Our apartment was just steps from a Starbucks (can’t escape ‘em!) and down the block from several markets and an Underground station, which we used extensively. Though compact, the apartment was lovely and met all of our needs. Our daughter offers a one-minute video tour here and below:

It was directly across the street from Paddington Recreation Ground, a gorgeous large park with numerous athletic fields, a café, playground, and a fitness circuit we had every intention of doing but never did. We did luck into a gaggle of dogs that our kids enjoyed petting, including one that serendipitously looked just like our dog, Teddy, who the girls were already desperately missing. (He’s being fostered by some dear friends of ours at home.)

Our first night there, we also lucked into finding the Warrington Hotel and Pub for dinner, a phenomenal classic English pub with a dubious history. We chatted with a couple of friendly people and exchanged political observations of our respective countries while drinking Guiness.

After [an attempt at] homeschooling in the morning, we hit the ground running on Friday, our first full day abroad, with one of the items on the top of the kids’ wish list: the London Eye, a massive Ferris wheel, even larger than I had envisioned, which offers a bird’s eye view of London. 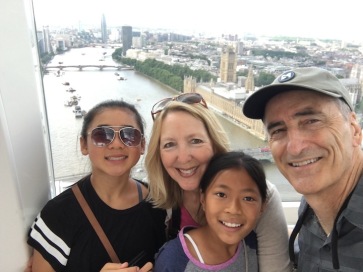 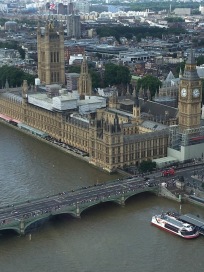 We got a slow start on Saturday, and I kid you not – the minute we finally got our act together and got out the door in the afternoon, it started pouring rain. Buckets. Not to be deterred and armed with raincoats, we trotted to the Underground for a visit to the British Museum for mummy gore, the Rosetta Stone and more. The kids alternated between keen interest and extreme boredom but hung on. From there, we had some classic fish and chips and went home to early bed.

Sunday was devoted to Harry Potter Studios, which turned out to be fantastic and should be a must-do on any visit to London with kids (or without). We had failed to get tickets early enough, so we paid through the nose for what are essentially legally scalped tickets, and they were worth every penny. We all loved it. It’s a self-guided tour through various movie sets, some special effects experiences and the breathtaking, scale model of Hogwarts. 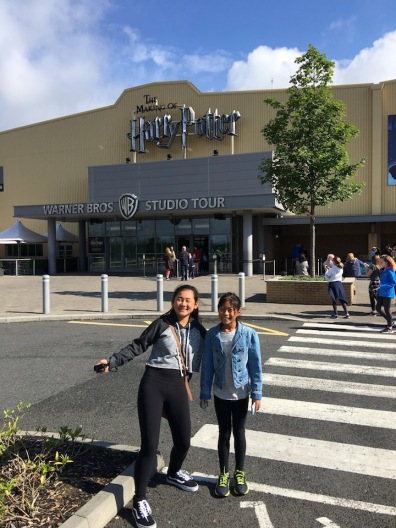 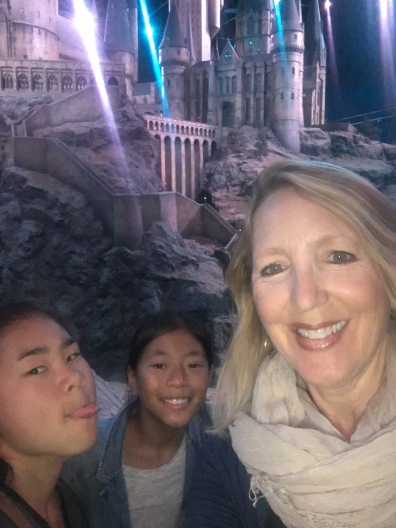 Monday the kids were burned out and begged off while my husband and I ventured for a walking tour of the areas surrounding Parliament, Westminster Abbey and Buckingham Palace. We left them ensconced in the apartment with a long to-do list of school tasks and a firm no-entertainment-screens rule in place. We came home to find they had gotten none of it done (surprise-surprise), but all bickering had ceased and they had had a great time together all afternoon. So that was an accomplishment. For our last night, we had dinner again with the locals at our neighborhood haunt, the Warrington. 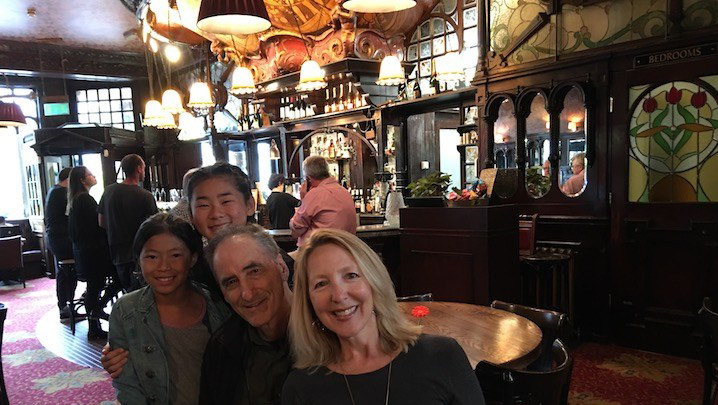 While we were only in London for five days (including arrival day), it felt like eons as we dealt with jet lag and the accompanying crankiness. We also felt almost an obligation to get in as much sightseeing as possible in this incredible city, which created a lot of stress as the kids pushed back with entreaties to just do nothing. On one hand, we wanted to get out and see things. On the other hand, we were sleep deprived, burned out from all of the trip prep, and had practical issues to resolve related to the overall year abroad.  If you had plotted the mood amongst us those first couple of days, it would have looked like the 2006-2010 stock market chart – full of volatility with major ups and downs – per person. It was finally sinking in that we had left everything behind and were now completely untethered. In hindsight, I see that the kids were dealing with all kinds of grief and other emotions about this, which leaked out sideways, as kids’ emotions often do. There weren’t direct objections to the new lifestyle we had adopted, but there was lots of whining about almost any of the sightseeing and a variety of completely trivial details, like the way soap felt or the position of a bed.

Add to this the jaw-clenching frustration and endless hours my husband spent trying to get our phone situation straightened out. At one point he almost burst a vein, and he easily topped my pre-trip, Naughty-Word-Jar, daily average donation by a wide margin. I was looking like Mary Poppins at this point, so that was a positive. In fact, I think he took the girls’ vocabularies into entirely new territory. While international phone service may be a cinch for business travelers and vacationers, the convenient options for a full year of hopscotching around the globe are quite limited, unless you’re willing to singlehandedly fund the phone company executive team’s pensions. The end solution was a kluge of Google Voice, Skype and local SIM cards that allows us to keep our US numbers and keep the cost down. More on that later in the tips section for anyone who’s interested. But it wasn’t without its complications.

In fact, he still had not gotten it all worked out when we had to pack up and leave for Ireland very early on Tuesday, July 25. Which put him in a rather nasty mood.

Alas, our plans to visit the London Tower, Highclere Castle (where Downton Abbey is filmed), the Cambridge University campus, and a variety of other great sites never materialized, which became our first lesson in realizing we’d truly have to view this year as a quick sampler platter and not an all-you-can-eat buffet.

On the calendar our trip looks like a series of short vacations, and we were still trying to operate that way, which was a huge mistake. In fact it was going to take more drama for us to finally get it through our heads that we’d have to slow down…