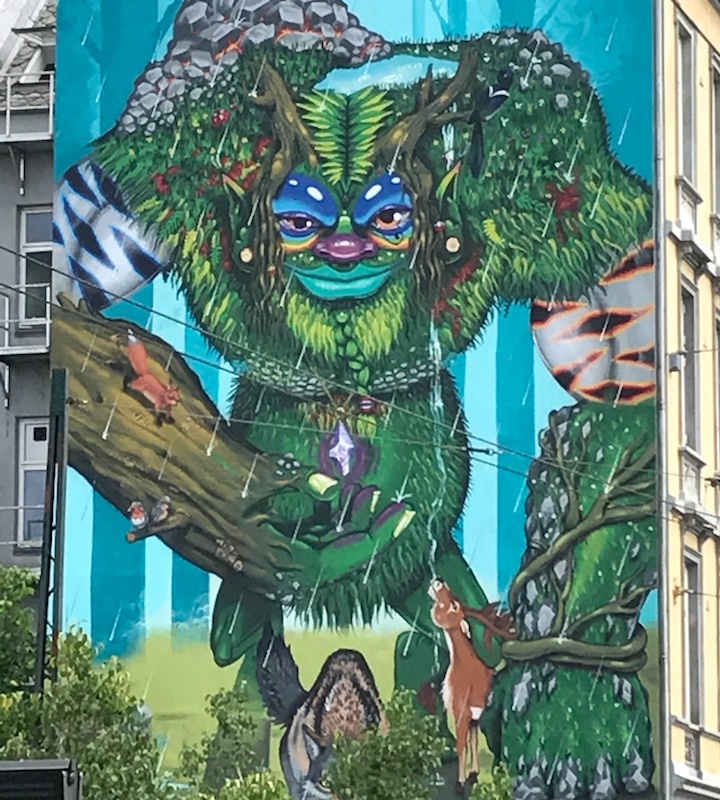 Lesson Learned: Make sure it’s even possible to get to a given destination before making other firm, non-refundable plans for said destination.

First, good news. No meltdowns for me this time.

This despite learning some expensive lessons with our trip to Norway during July 29-August 2. However, I’m pleased to report they were completely worth it. Norway was absolutely breathtaking and far exceeded our high expectations on all fronts. And what made our trip even better is that we got to do it with good friends, including a 12-year-old our kids know and love. Oh what a difference a companion makes. We had happy campers again. Hooray!

Our climb up the Norwegian travel learning curve began before we even left the U.S. When I suggested we rendezvous there with friends as part of their European summer vacation, we had already booked the London and Ireland legs of our trip. Ireland is not far from Norway, so I naively assumed it would be a cinch to hop over to Norway as a next stop. Before investigating flights, we agreed on dates. Mistake #1 was accidentally booking a nonrefundable hotel room by not reading the fine print. [Who reads the fine print??!!] We then decided to put our two families together in one Airbnb apartment, a fabulous find at a fraction of hotel costs and with an amazing view, also nonrefundable. When I tried to cancel the hotel, the needs-a-Dale-Carnegie-human-relations-course manager refused. And refused. And refused. This after telling me July is peak season, and they always sell out. Hunh?

Clearly Grumpy got separated from the other dwarves somewhere along the line and shipped to Norway. He also apparently missed Econ 101 during freshman year when they teach you that even a partial refund for a room you can turn around and sell again at full price helps your bottom line.

Moving right along, I then tried to find flights. Did you know that it’s not so easy to get from Dublin to Norway on a Friday night or Saturday morning, even though they’re neighbors? Apparently this is not a route in high demand. Boxed in by our dates carved in stone, there were no good options. Available routes were either way too pricey, sporadic (only flew certain days of the week) or circuitous (40-hour journeys through distant lands). To make a long, flight-hunting story short, I had to get creative. Our most time- and cost-effective option was: Fly back to London Heathrow, take a long, expensive Uber ride to Gatwick, spend the night at a nearby hotel, and then leave super early the next morning out of Gatwick to Bergen. I know. Right? Cray cray.

Again, all worth it.

Bergen is a stunningly beautiful tourist, shipping and university town situated on the west coast of Norway amongst a vast archipelago and numerous fjords. 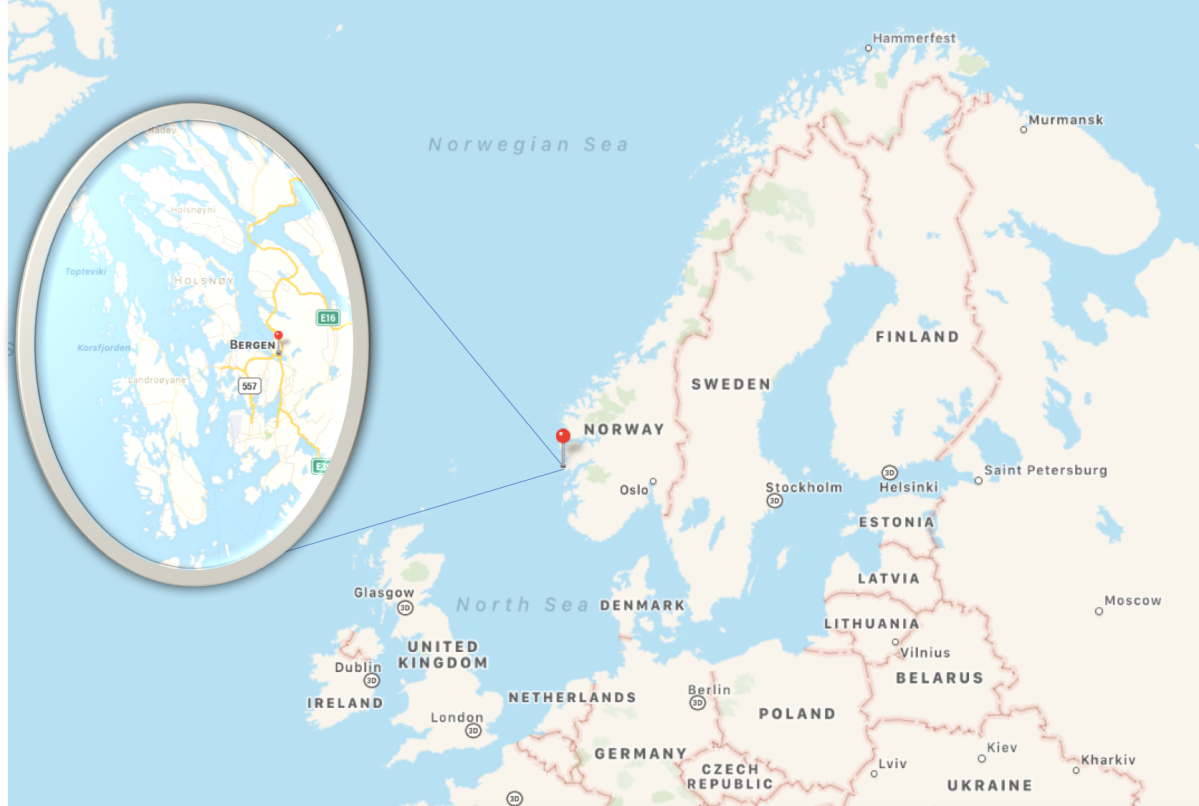 Here is a bird’s eye view from our Airbnb apartment (highly recommend, BTW): 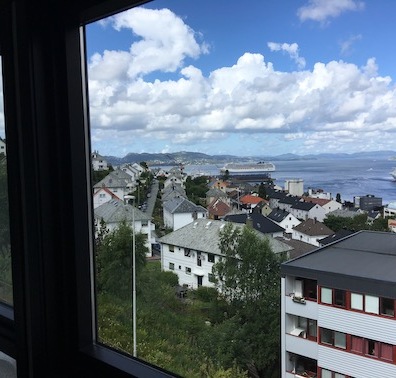 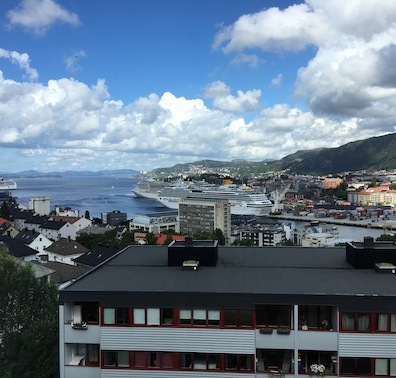 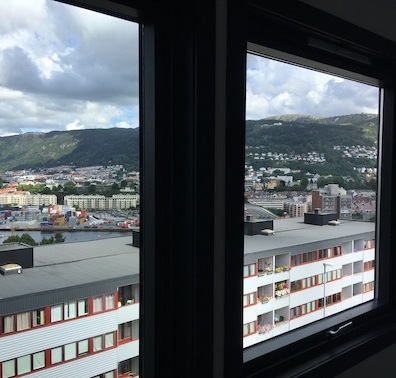 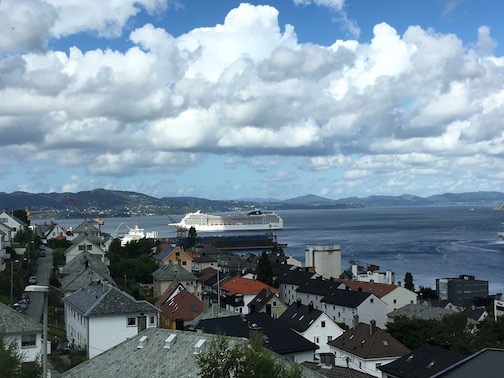 It seems we aren’t the first to discover this idyllic hamlet. (Well, it’s Norway’s second largest city, and the metro area exceeds 400,000 in population, so I guess you can’t call it a hamlet. How about a mega-hamlet.) Some 300 cruise ships bring over half a million visitors each year. Many more arrive by plane and train. We quickly understood why. It was love at first sight. 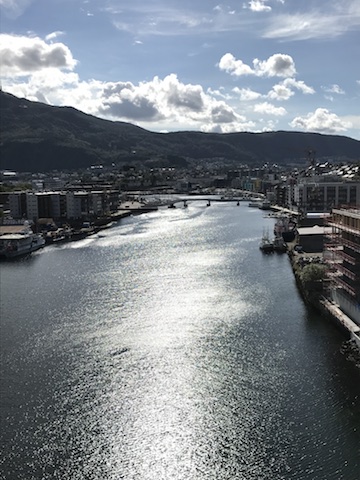 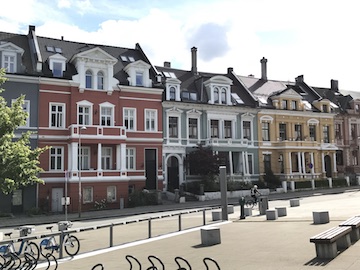 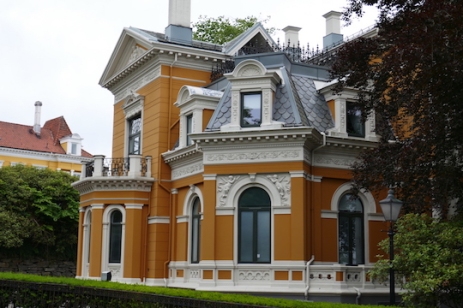 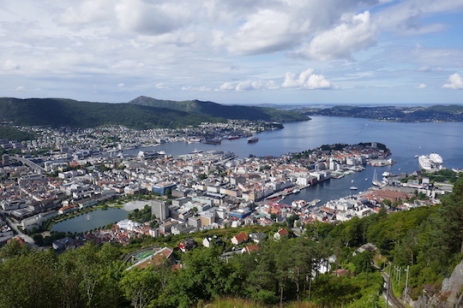 We immediately found out that some of our suitcases weren’t as waterproof as we had thought. Yes, we arrived in relentless, pouring rain, which we would experience often over the next few days.  The friends meeting up with us shared that the Norwegians say, “There is no bad weather, only bad clothing.” And they are right. As long as we had our warm layers and trusty raincoats with hoods, we were good to go, just as we had been in rainy London and Ireland.

We spent our first day exploring the town on foot and riding the steep Fløibanen Funicular to the top of Mt. Fløyen. Though it was a novelty worth doing, they stuffed us in tighter than a Japanese subway at rush hour, and as it rose, my stomach had a stern conversation with me that almost turned violent. No one else seemed to have any trouble though. The reward for hanging in there was a spectacular, panoramic view from on high. We ate sandwiches,  mediated some sibling spats, and pet the roaming billy goats, each of whom had a formal name. Being responsible parents, we also watched as the kids climbed and played on the giant wheel and a daredevil-obstacle-course playground that would never be allowed to step foot in the U.S. for fear of mangled bones and lawsuits. 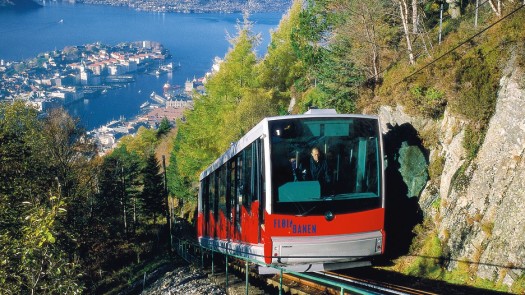 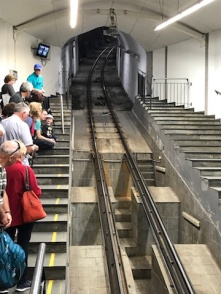 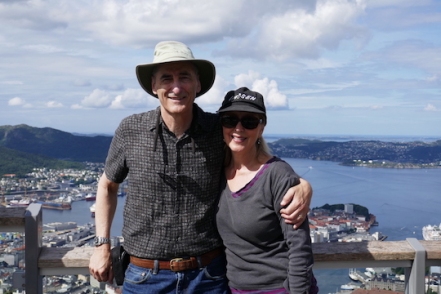 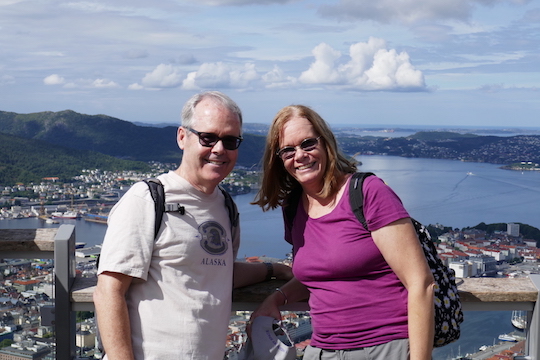 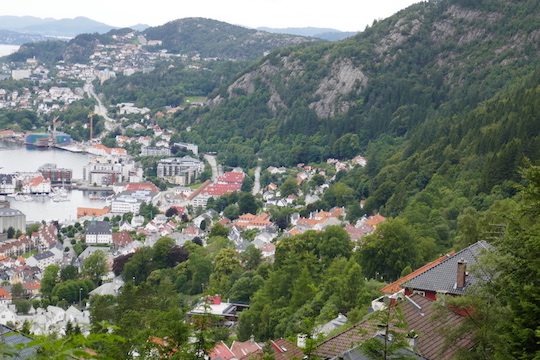 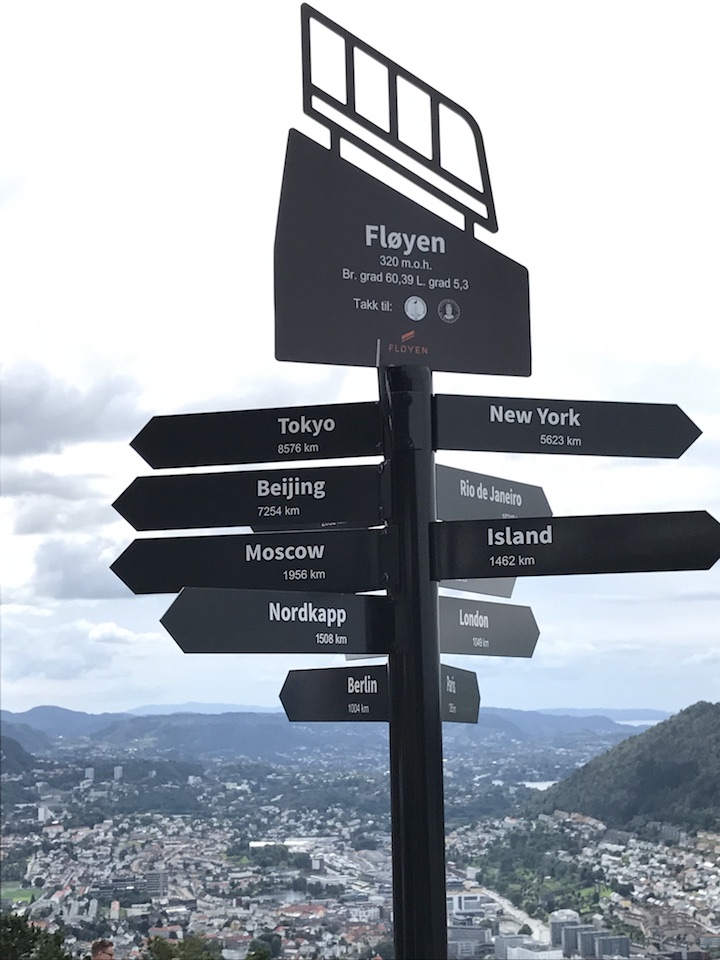 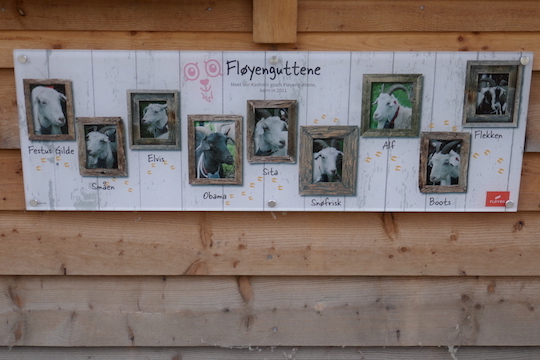 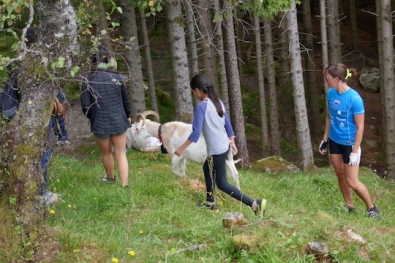 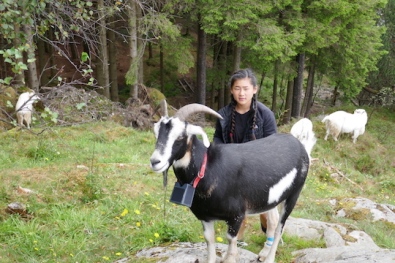 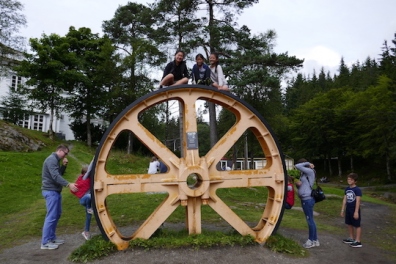 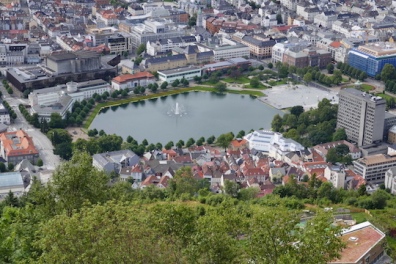 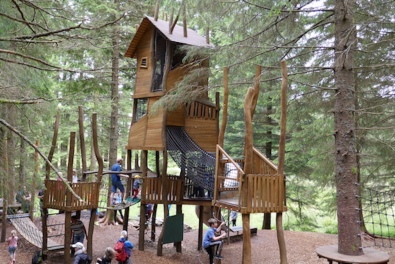 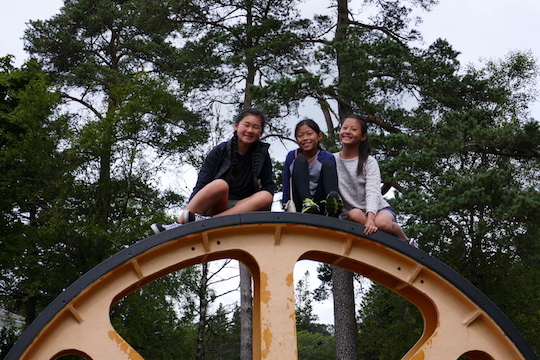 After walking back down, we made a pitstop at the prepaid hotel we weren’t staying at, figuring we could use it as a base, since it was close to the center of the action. Sadly, the building had the aesthetic of a 1930s mental institution, and the room the cold decor of a 1970s Holiday Inn. It was such an unappealing environment that the seven of us left after 10 minutes and never returned, feeling the forfeited money had been well worth not having to endure the room for four nights.

By contrast, our apartment’s beautiful view and comfort held us captive in the evenings, where we cooked “at home” and enjoyed each other’s company. The kids had a ball together, elated to have an age-appropriate travel companion. In the name of not Fakebooking it, I must share that my two kids had regularly-scheduled tiffs, but as time would later tell, it was mostly attributable to lingering jet lag and a hangover from the rough 24 hours we spent getting door-to-door from Ireland to Norway.

During one particularly challenging interlude, dealing with tween/teen emotions and fatigue, I again wondered, out loud to my friend this time, whether we were making a big mistake. She is a wise middle-school educator and shot back with a reality check: “Uh. You’re wondering whether a once-in-a-lifetime opportunity to travel the world as kids, a total gift that will pay for itself forever, is going to damage them? Really?” Okay, point taken. It was time to put cement shoes on those thoughts and push them overboard. Feed them to the fish, for good.

Our second day was a 12-hour sojourn to the fjords, which deserves its very own post, coming soon.

Our last full day together went quickly. Most of the gang headed out early to take in the main tourist district while I lingered behind to wrestle with travel logistics for getting to Copenhagen the following day – nothing like waiting until the last minute! Thank God for Airbnb, European budget airlines and the Internet. I met up with the others later, but our youngest daughter needed a day off and stayed in altogether. The three-and-a-half days had gone quickly in some ways and wonderfully slowly in others. 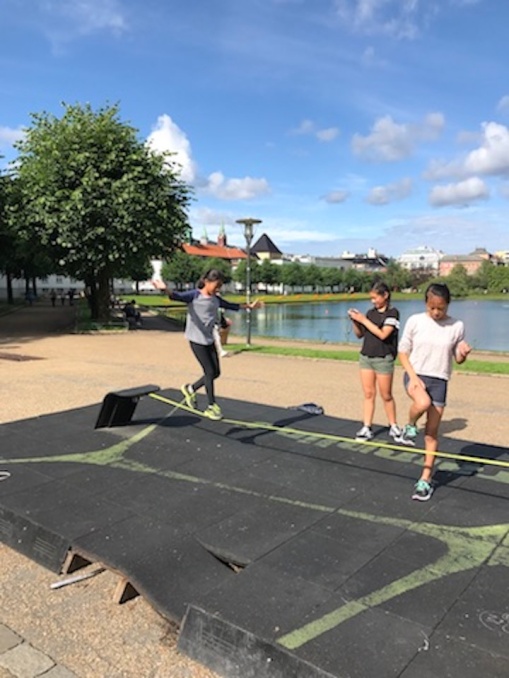 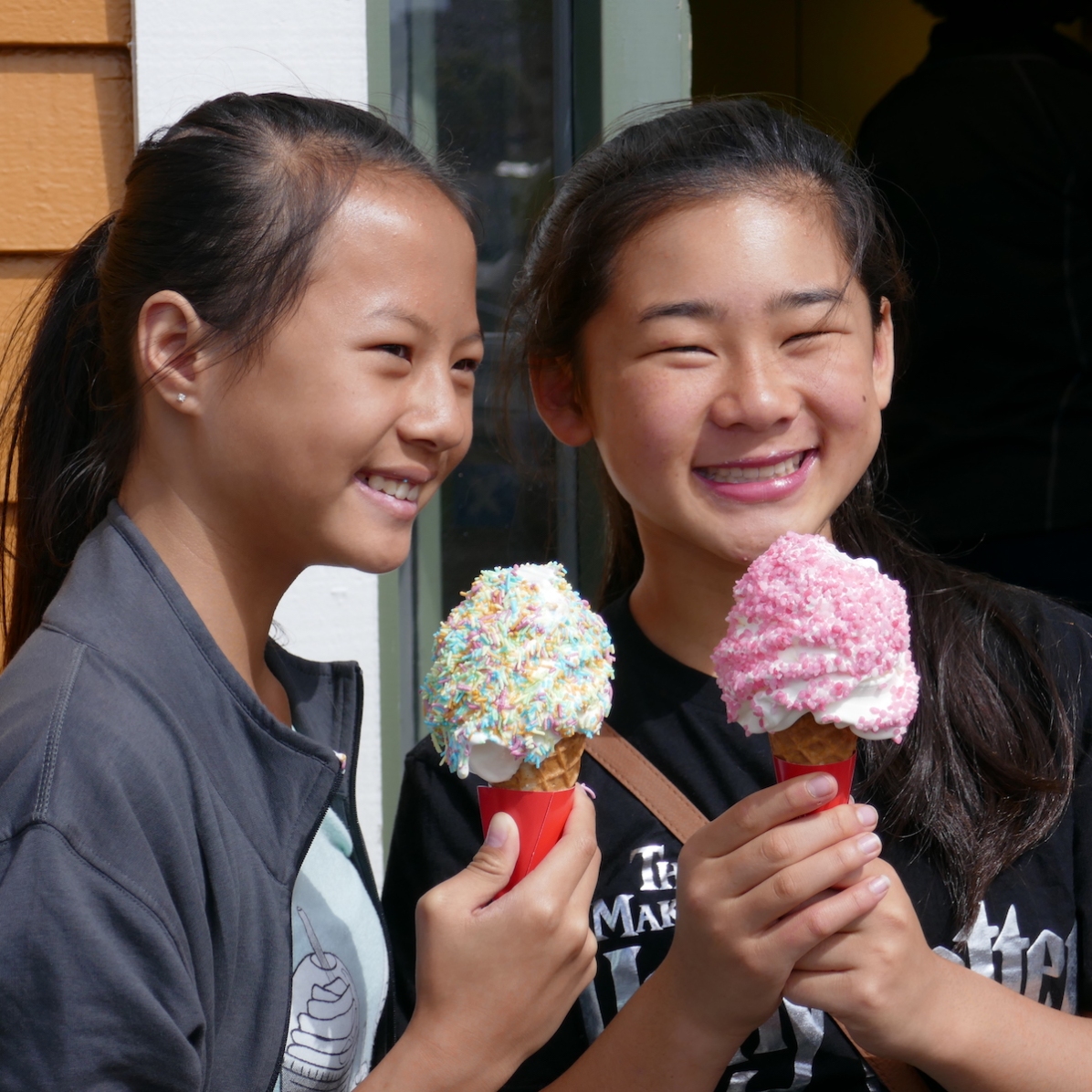 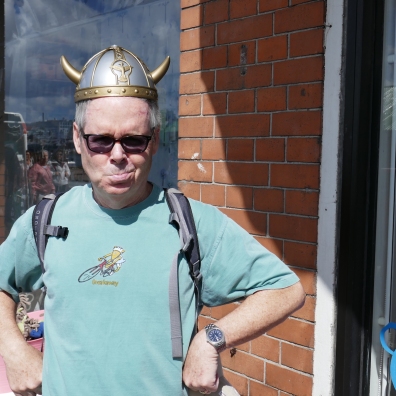 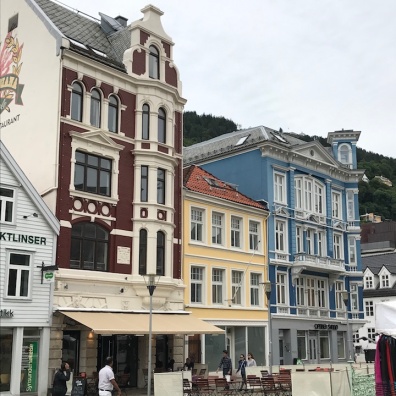 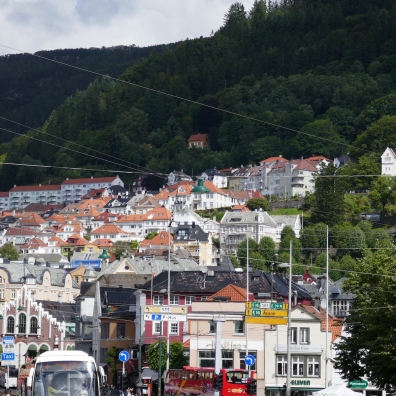 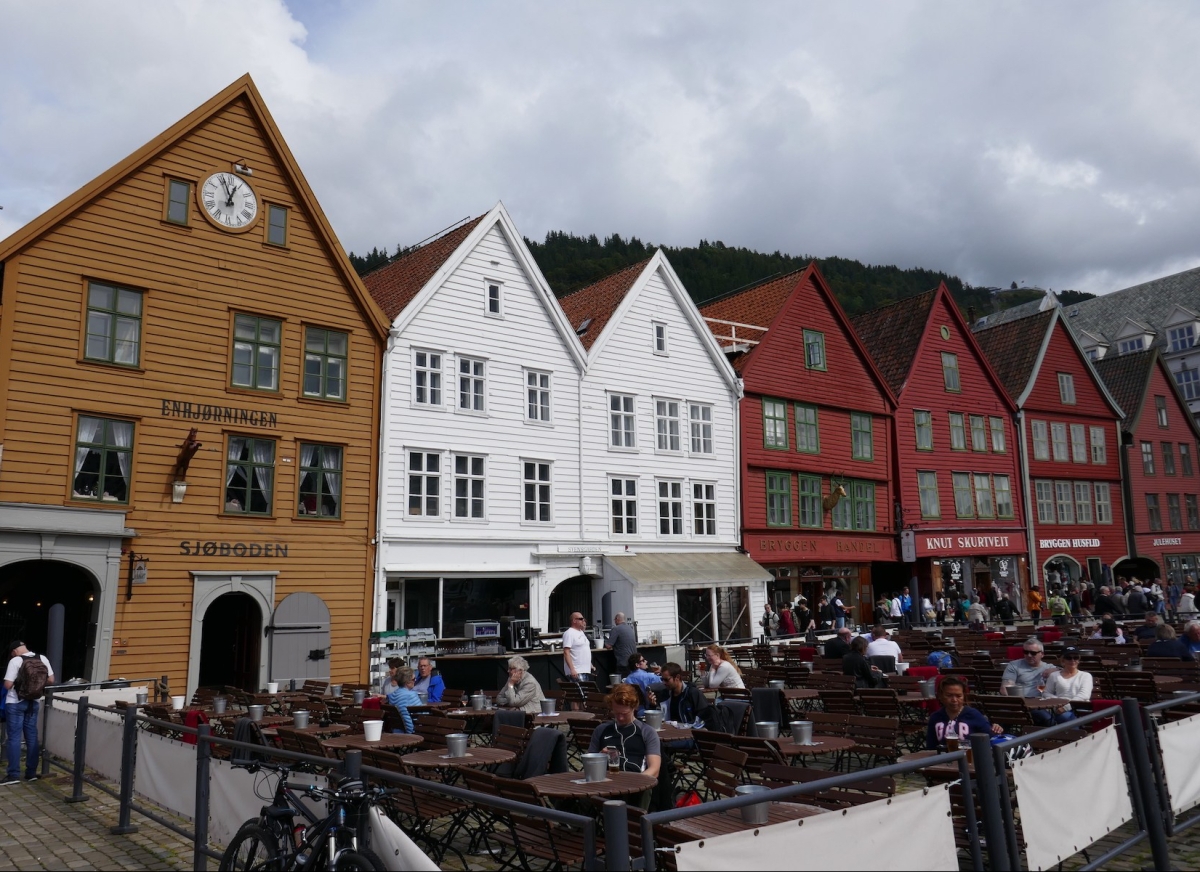 What are the Norwegians like? I’m glad you asked. Fantastic people. Beautiful – all of them. Friendly. Outdoorsy. Just lovely.

What really made the trip particularly wonderful was having these dear friends with us. Bonus #1 is that we travel well together. Bonus #2 is that the husbands are like a Vaudeville comedy duo, so they keep all of us laughing (sometimes groaning). Bonus #3 is that this amazing family is very generously fostering our dog while we’re away and were able to give us cuteness updates. Bonus #4 is that they are a wealth of tips and information just by nature, so we got lots of useful tidbits for our remaining travels. It was hard to say goodbye.

Coming Up: Have You Driven a Fjord Lately?