It was quite a scene. What we noticed first upon our return from dinner was a growing collection of people gathered along the dock a few boats down from ours, looking up and conferring with one another. Then we saw why.

The hive of activity was fixated on solving a rather serious problem that would have been funny, had it not endangered another vessel. A very flashy sailboat (okay, let’s just nickname it, “Flashy”), which had probably won some very serious races in its heyday before being put out to pasture as a charter (rental) boat, was now heeled over as if full of wind and pounding toward the finish line, except that it was standing still, tied up at a dock in Stari Grad on the Croatian island of Hvar. And its mast and rigging were getting dangerously close to the rigging of its neighbor, another sailboat for hire. Things were about to get interesting.

It turns out that Flashy’s keel was much too deep for the slip, and while the crew had been yucking it up all evening at a nearby restaurant over some drinks and a languid dinner, the tide had been going out, digging the long keel into the mud at an angle. They had come back to find their home resting comfortably on the sea’s floor at a sharp angle. If its mast were to entangle the rigging of the next-door boat, one or both boats could be seriously damaged.

The motley assortment of bystanders (including us) who had gathered around Flashy’s bewildered and panicked skipper and crew, were brainstorming fixes. There were various arguments in various languages about what to do and various attempts and failures to right the boat. Many cooks in this kitchen.

At one point, a well-meaning helper broke one of Flashy’s winches (a very important and expensive apparatus on a sailboat) trying to grind the boat back into an upright position with a rope, despite the skipper’s protestations. This mishap unleashed the skipper’s pent-up anxiety about the situation, and in his rage, he almost tore off the Good Samaritan’s head, having to be physically restrained by his crew.

The French skipper on the endangered boat next door must have really tied one on at his own languid dinner earlier in the evening, because he was snoring soundly down in his cabin throughout this entire ordeal. When concerned bystanders finally roused him in the midst of all the drama, he pulled on his cranky pants in a stupor and stepped out to see why in the hell he was being yanked out of bed. He was even more irate when he saw the impending disaster and realized his only course of defensive action would be to move his boat because of the, well, let’s just say it, the utter stupidity of the other boat’s operators.

It’s not just boating 101, it’s common sense, that you make sure the slip you’re in will be deep enough for your boat at low tide.

Adding insult to injury, the marina was completely full, so Mr. Cranky Pants (and who could blame him?) would have to anchor in another cove somewhere in the distance and lose even more sleep babysitting his anchor all night. Needless to say, he was p.i.s.s.e.d. It could have been a movie scene – this groggy, old salt swearing loudly in French with a lit cigarette hanging out of his mouth, as he started his engine and released his dock lines to putter out into the dead of night from under the encroaching mast of this other boat, while a cadre of people along the dock stood by in sympathetic support but each silently thinking to his- and herself, “Better him than me.” We could hear him cursing long after he disappeared into the inky-dark harbor, the sound of his still-rambling voice finally trailing off as he rounded the harbor head and entered the open water.

The next morning, Flashy was still completely dug in. With both immediate neighbors now departed, it sat like the embarrassed, isolated fifth grader with a case of bad gas, whose classmates have discreetly moved across the classroom to escape the stench.

Our skipper, Igor, seemed nonchalant about the tragedy, which surprised us, until he revealed the real kicker — and this is where karma comes in — It turns out that Flashy had broken protocol the day before by not calling ahead to the marina and reserving a spot. The skipper had just helped himself to a slip, which you just don’t do in them thar parts. [Cue banjo music from Deliverance.] In retaliation, the marina staff didn’t feel it necessary to warn him that this particular slip would probably be too shallow for his boat or remind him that it would be an unusually low tide that night.

Lesson #1: Never, ever mess with karma on a boat. Or at a Croatian marina. The punishment is swift and severe.

Lesson #2: This is why professional skippers come in handy.

As we left the dock, it was a sadly comical sight. Flashy’s demoralized crew members, each of whom had surely spent a sleepless night dangling off his tipped-over bed below deck, was silently stewing in the cockpit (exterior seating area of the boat) while eating breakfast and mulling their fate.

Meanwhile, we made our way out of Stari Grad, off to new adventures in the dazzling Adriatic Sea.

Next up…Don’t Judge Me. (Oh, the Lengths We Go to for Our Children…) 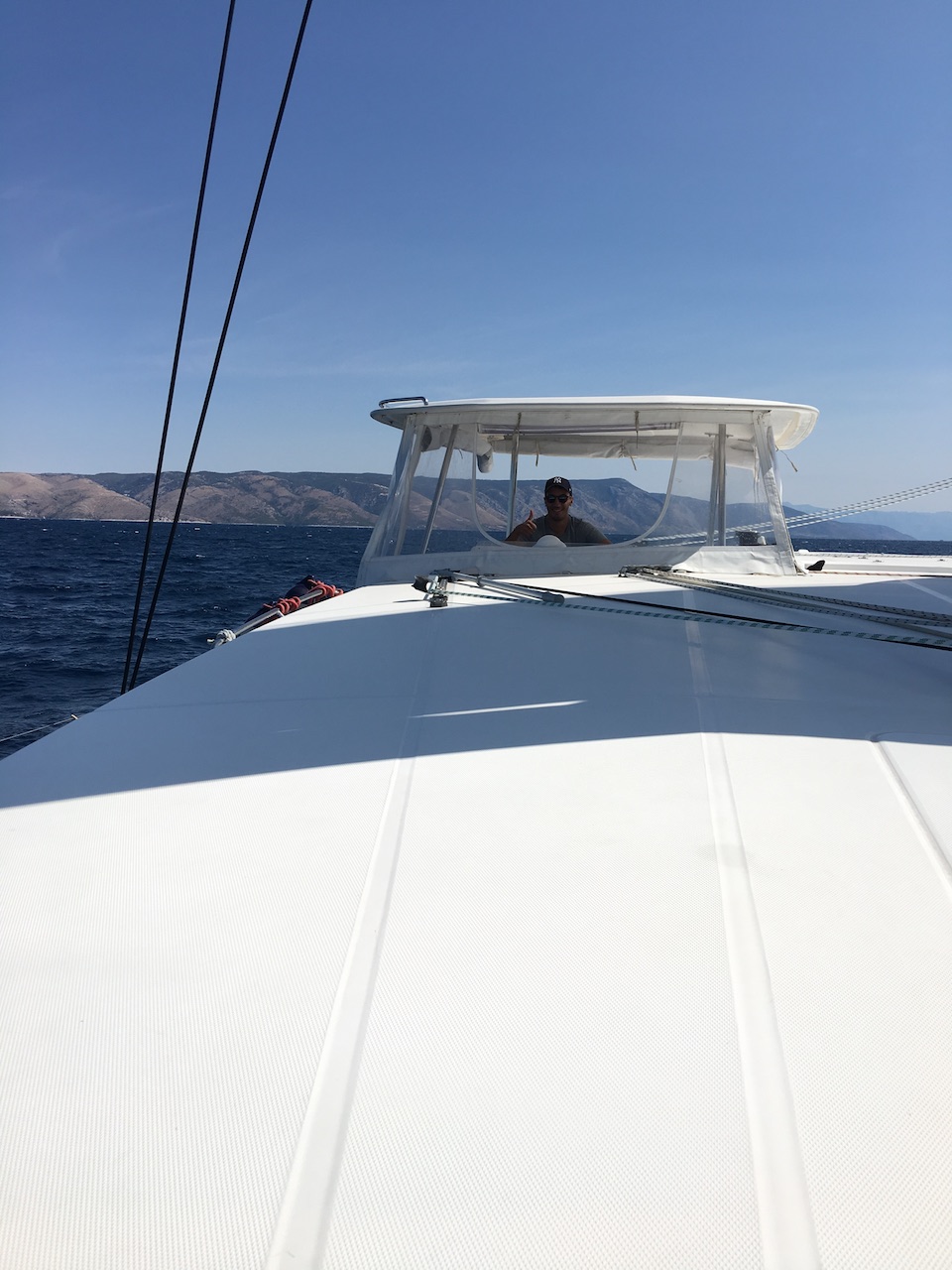 6 thoughts on “Never, Ever Tempt Karma on a Boat, and Here’s Why…”