As I recounted in my last post, our decision to ditch Greece and stay in Croatia was more one of travel-planning burnout and budget than anything else. But it turned out to be a huge blessing.

We took a taxi to Podstrana, a tiny coastal resort town just 20-30 minutes south of Split. We arrived on a gloriously beautiful day and were thrilled to see that the apartment was literally steps from the water.

We were on the top floor of a small building of six or so units. There was one major hotel nearby, a Le Meridien, and everything else was family owned.

As it happens, our host was savvy enough to use Airbnb, but most property owners literally stood at the nearest bus stop with a cardboard sign reading, “Room for Rent” (in Croatian).

Split and Podstrana may have had only 20 minutes of travel time between them, but they were otherwise decades apart.

Our initial reservation was for just a few days, but upon arrival, we immediately scooped up all available days until their next guests were to arrive. We knew we’d like it there. The beach, with its pebbly sand, was gorgeous and the water clear. 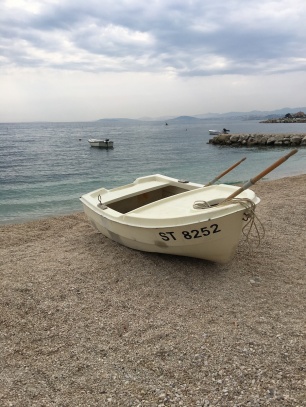 The beachfront restaurants were just feet from the water line and marvelous.  Sadly we’d have only nine days and needed to make the most of them.

The first order of business was to get busy with school work, knowing there would be many periods during the year when we’d get little done.

The second order of business was to find some friends for the kids. This must have been the week prior to school starting, because the beach was full of them. As a bonus, there was a huge inflatable, floating obstacle-course thingamajig right in front of our place, which was a kid magnet.

Now, given how much they had been pleading for pals leading up to this point and given how we were now practically designing the trip around our odds of meeting kids, you’d think my kids would have bolted out the door and roamed the beach until they made some friends. But no.

ARE YOU FREAKING KIDDING ME????

So let me get this straight. You have been hammering your parents for the last five weeks about not being around other kids. Now we have hit the kid jackpot. We are surrounded by other tweens and teens bored with their siblings and families and dying to hang out with others their own ages. And now you don’t want to leave the house?

[Someone put me out of my misery.]

Well, like a responsible parent, did I kick them out of the house while screaming, “GET YOURSELVES OUT THERE AND FIND YOURSELVES SOME $%^&# FRIENDS!!!”?

Like a rational parent, did I try to coax them into it with gentle prodding like, “Oh, sweeties, you’ll have so much fun if you just get yourselves out there”?

Instead, like an at-my-wit’s-end-and-wildly-irresponsible mom, I rolled my eyes, huffed in disgust, hit the beach myself and trolled for kids. Pathetic.

Note to self: If you want to target a location where your monolingual kids can meet other kids, it helps if said location attracts even a scintilla of English speakers.  I couldn’t even meet other adults with whom I could speak some German, much less any English. Apparently, Podstrana is a well-kept secret among English speakers and Germans. Who knew?

After a few false starts and several days, I finally managed to spot a very bored, lonely ten-year-old Italian and chatted up her parents. I dragged my preteen down to the beach, and despite the language barrier, they managed to have some fun in the water. While there was no deep bonding going on, it offered hope. At least I ended up having a marvelous conversation with her Croatian mom, Italian dad, and their local friend, who spoke decent English and helped with translation.

A day or two later, again after not being able to drag the girls out of the house, I went on the hunt for that same little girl and any others I could find. (My husband had wisely decided to go to Split for a haircut and was nowhere to be found.)

This time I planted myself near a mom and a couple of girls who looked about my kids’ ages. I started to say something to the mom, but she was so relaxed, laying on her blanket and engrossed in her book, that I hesitated. I was by then feeling a little self-conscious after all of the previous attempts to engage non-English-speaking parents on this beach who had looked at me like, “Why are you interrupting my peaceful vacation, strange-tongued whackadoodle?” Plus, she was clearly ignoring her children the way I do when I’m desperate to get some peace of my own.

When I noticed how bored her girls seemed and how they were silently torturing each other just the way my kids do when they’ve had enough “together time,” I breathlessly ran into our apartment to drag the girls and some water toys to the beach. My hope was that I could get the kids to organically migrate to one another like molecules, without disturbing the mom.

Only my youngest would come. And then she just stood there on the sand, feet from the other girl her age, resisting my silent, discreet nudges to invite the girl to play in the water. Then I spotted the Italian girl from the previous day and said, assuming no one would hear or understand, “There’s Christina from the other day! Go ask her to play!”

And then it happened. A miracle.

The other mom, a beautiful lady, suddenly jolted out of her reverie and into an upright position as if someone had just poured cold water on her. She looked around wide-eyed, her neck stretched up and her head frantically swiveling back and forth like Linda Blair’s in the Exorcist but with a happily excited expression, and exclaimed in native English, “Bored kid?! Bored kid?! Did I just hear there’s a bored kid looking for someone to play with??!! I’ve got one! Zoey, get over here!!”

And that was it! We had friends!

They turned out to be an utterly delightful family from London (and in a cruel twist of irony, we had stayed a month prior not that far from where they live). Like us, they had stumbled upon Podstrana. Like us, they were at a nearby Airbnb apartment. Like us, they had two girls who had had enough of each other. And like us, the parents (and their grandma/mom/mother-in-law) were super fun and cool. (Well, at least they are.) 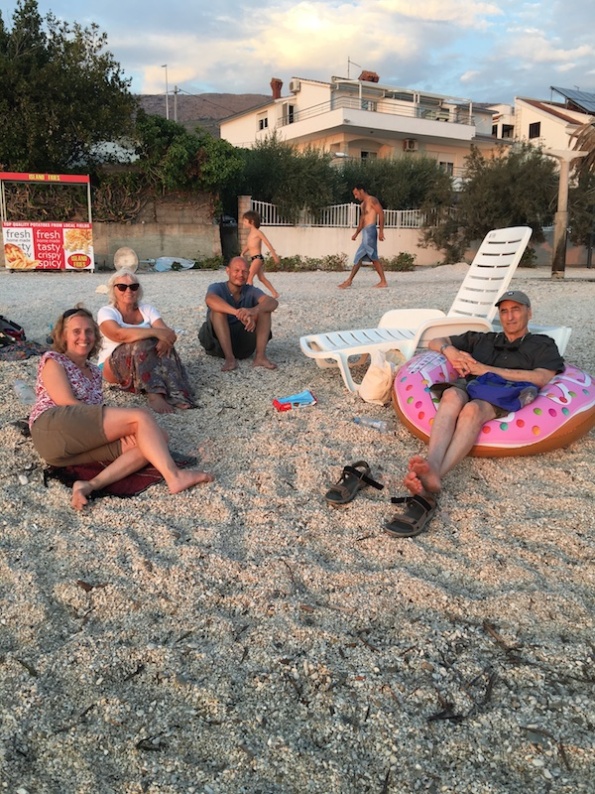 It was love at first sight for all of us. The two sets of girls became instant, inseparable buddies, and we parents talked nonstop, with lots in common. The kids immediately planned sleepovers. We joined each other for dinners. We hung out on the beach. The parents were hilarious, interesting and so fantastic. Grandma was just as fantastic. It was an answered prayer. 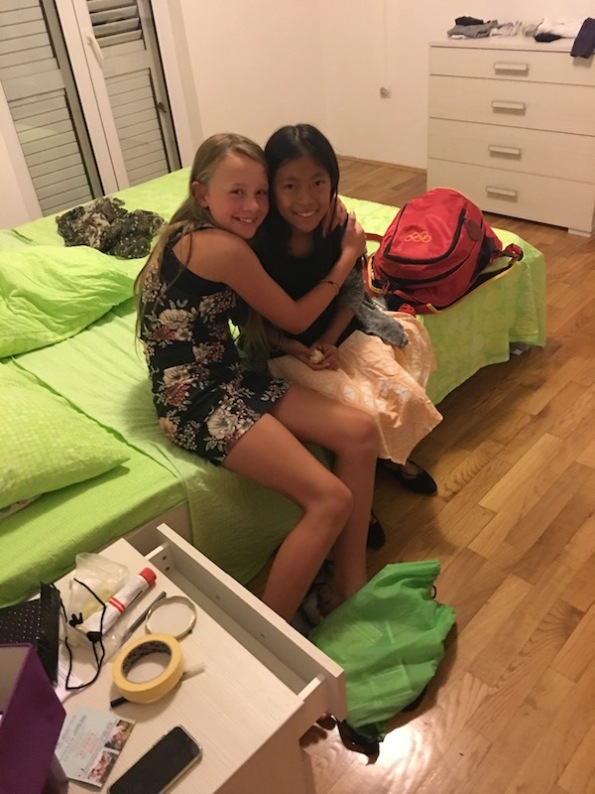 With only a few days left of our respective trips, we made the most of what we had, capped off by one of the most spectacular meals of our lives.

The restaurant is Konoba Argola, and put it on your list, if you ever go to Split. First, you have to make a reservation exactly 24 hours in advance and order your meal at that time. That’s because they locally source (from their own property or immediate neighbors) and cook the food all day long. If it rains, dinner is cancelled. That’s because the restaurant is outdoors.

It’s a tiny, family-run place at the top of a small mountain with spectacular, panoramic views of the sea and Split in the distance. 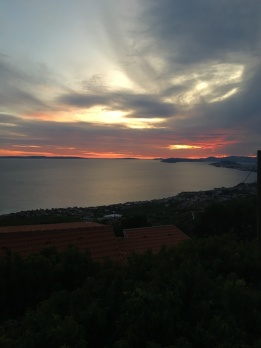 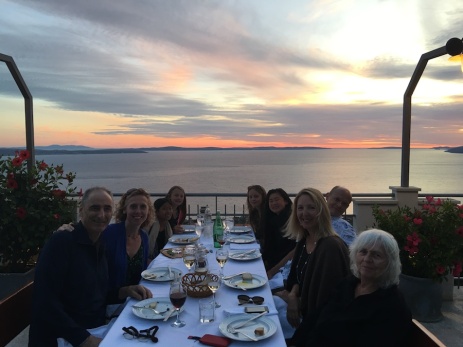 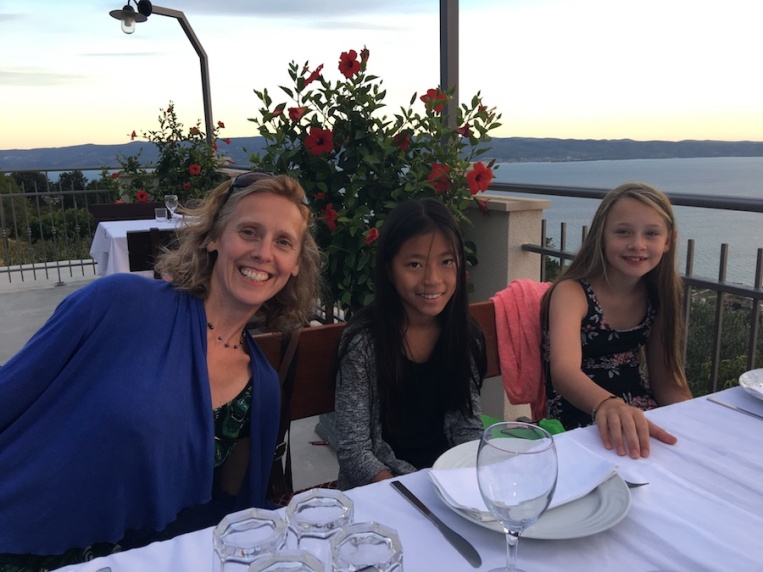 The setting is pretty wild. After driving up the winding road, we went for a short walk to explore the neighborhood, which began as (and still feels like) a remote mountaintop village in ancient Roman times. 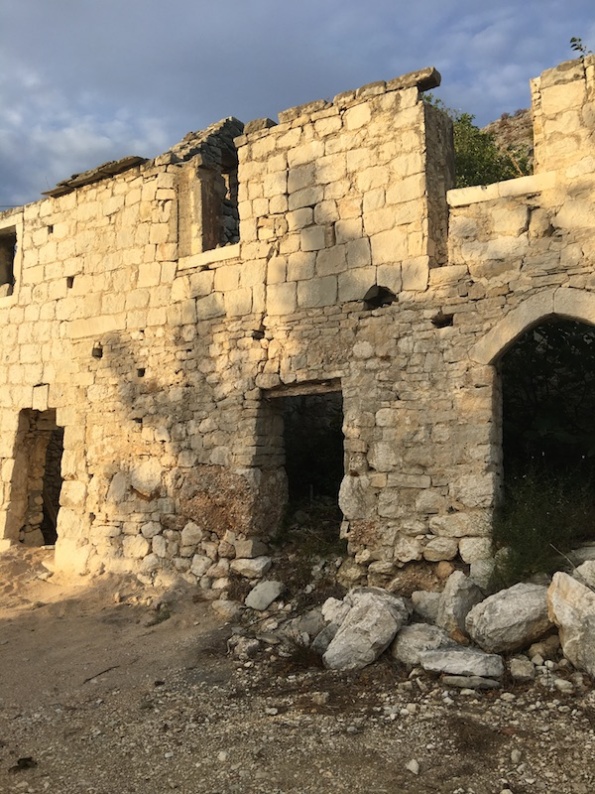 One striking feature is all of the abandoned, crumbling, vine-covered stone homes, as though the occupants just up and walked away one day. And that’s exactly what happened.

We came to discover that these are haunting reminders of the terrible civil war that ravaged the country in the 1990s but led to Croatian independence. It turns out that the law in Croatia requires proof of death before property of the deceased can change hands. These ruins were monuments of the missing – they are the homes of people, mostly men, who had left one day to go fight in the war and had disappeared. The homes will forever belong to them, unless their bodies are found. Which probably won’t happen. 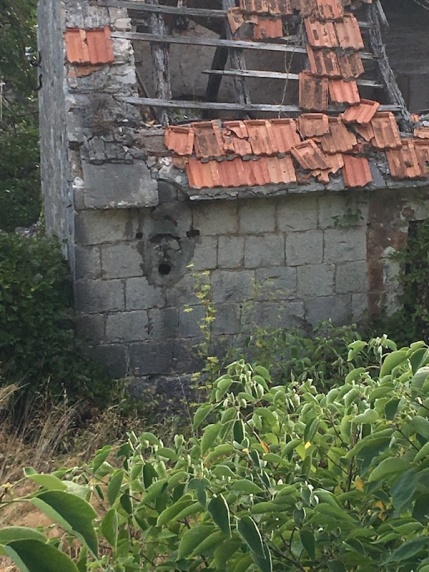 On a less eerie and gruesome note, the food at Konoba Argola is to die for. {Did I really just say “to die for” after the above?} We had various meats, prawns, calamari, fish, potatoes, salad, homemade bread and wine, and more. The meat, calamari and potatoes are slow-cooked for hours under a metal dome on a wood-fired grill in a smokehouse. 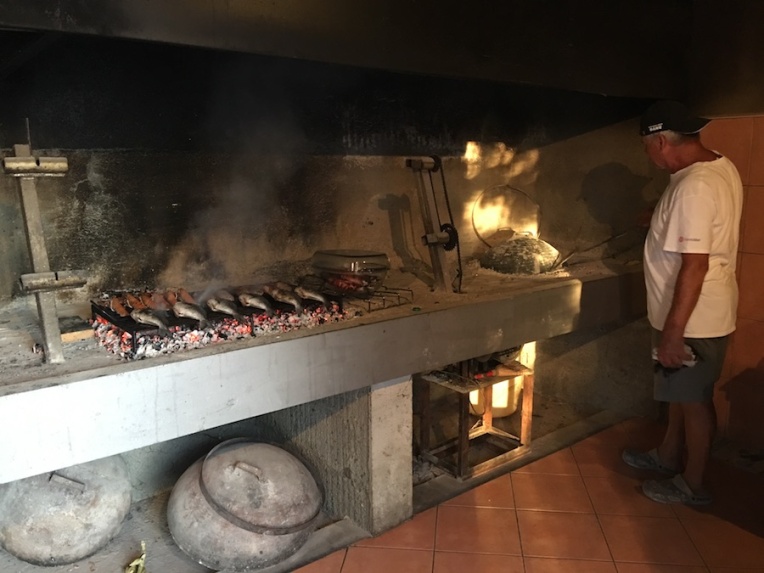 The dome traps the moisture so that all of the food comes dripping in carmelized juices and melts in your mouth. I wish I had the culinary writing talent of a restaurant critic in order to give the experience a proper description. Suffice it to say that it was memorable, made more so by the company of our new-found friends, who we hope to stay in touch with forever.

Up Next…Monet and Meltdowns in Paris