Picking up from my last post, a motivation for going to Colmar, France, was to use it as a jumping off point for day trips, and we managed to take two. Both were trips down Memory Lane, and one was particularly surprising.

The day we randomly decided spur of the moment to go to Lucerne, Switzerland, an easy 100-mile, 90-minute drive, it took little convincing to get the kids on board. Once they found out Switzerland was the birthplace of milk chocolate, they were in. “Just in case,” we packed a small overnight bag. It was another country, after all, and who knows what might happen? It was a good thing we did. 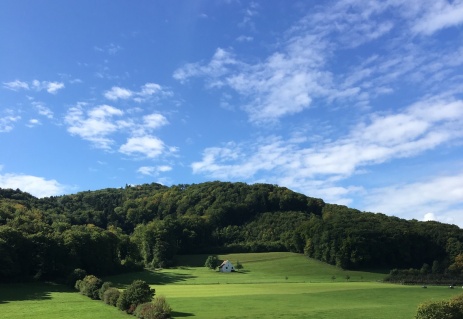 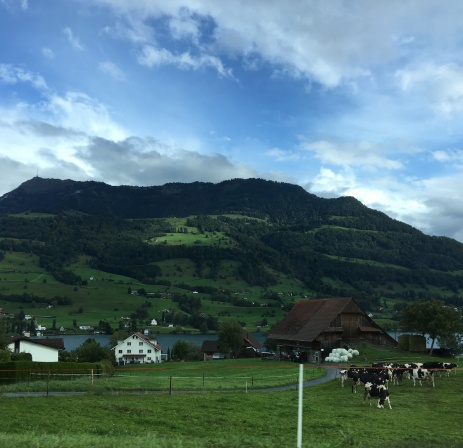 We decided to check out the Swiss Chocolate Adventure at the Verkehrshaus der Schweiz (or Swiss Museum of Transport), a sort of educational amusement park ride that teaches you all about how chocolate is grown and made. Really fun and really interesting. At the end, we went crazy in the chocolate shop. (Of course, there was a chocolate shop to go crazy in. What kind of marketer doesn’t provide a chocolate shop after a chocolate adventure ride???) 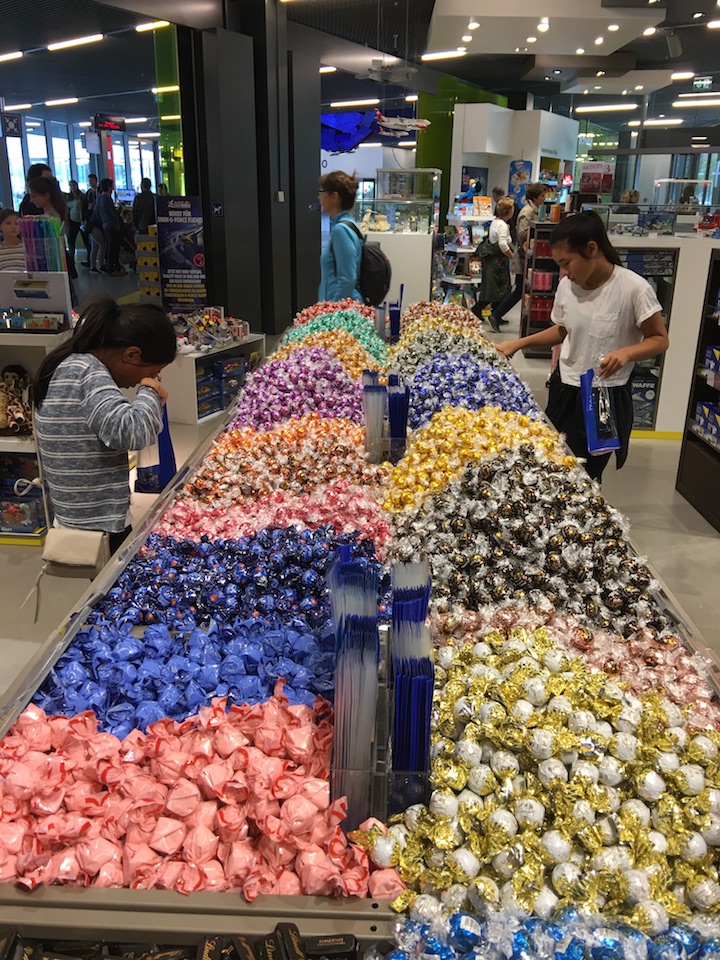 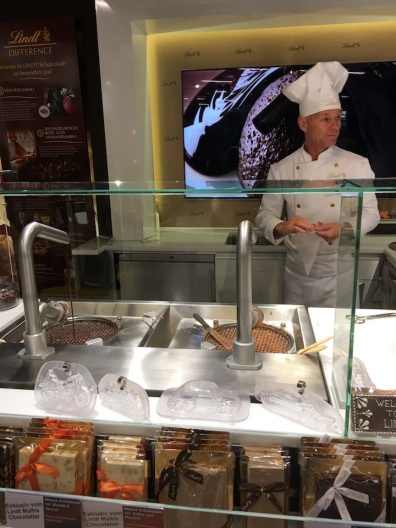 As I’m writing this, I’m looking at the museum website, wondering why we didn’t go to the actual museum while we were there in the building. It looks really cool! Hunh?

Anyhew. Attempting to walk around Lucerne’s picturesque, beautiful lake, it started pouring rain, so we decided to just keep driving. That’s the beauty of spontaneity. If you don’t like where you are, go somewhere else. 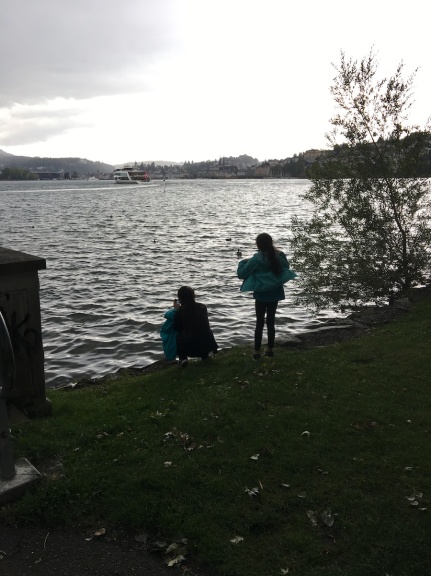 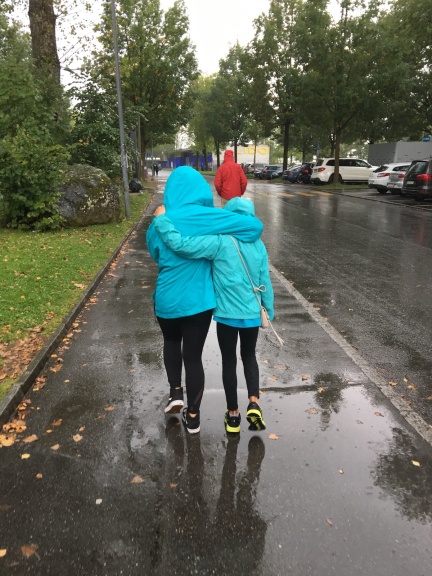 On the Hunt for an Old Haunt

The backstory is that my husband took a semester off from college to bicycle around Europe, and this turned into a year. At one point he ran out of money, so he moved to and took a job at a factory in the tiny village of Domat/Ems, Switzerland for about four months to stock up his bank account again. During this period he also spent time in Chur, the larger town nextdoor. He was curious to see what, if anything, had changed in the area. In particular, he wanted to see if by some nutty odds, the restaurant where he and his buddies used to hang out was still there. He had a name but no address. It had been owned by a Swiss couple whose crazy, rebellious, counter-culture, American son-in-law, Rebo, worked with the guys at the factory. His wife, Jacinta, was also a fixture. I envision my husband and his pals as young hippie versions of Frasier Crane, Cliff Clavin, and Norm Peterson in a Swiss version of Cheers.

We drove into Chur, and he didn’t recognize anything. Not to say it has changed. He just wasn’t remembering any of it. He was drawing a big, fat blank.

To be fair, it had been a lonnnnng time. We’re talking several decades.

We found a restaurant by the right name, but it wasn’t the one. Disappointed (because yes, we were unapologetic in our unrealistic expectations), we decided to take  a quick run by his old factory just to look at it. By now it was dinner time, so we also needed food. We stumbled our way to Domat/Ems and were winding through a narrow tiny street also keeping our eye out for potential eateries when – ding-ding-ding-ding! – what did we see but the restaurant! IT WAS STILL THERE!!!

The teeny-tiny Swiss restaurant was now an Italian restaurant owned by a young Italian who spoke no English. We went in, and the din of a private birthday party in progress went silent. All eyes turned to us. No, that wasn’t awkward.

Between his broken German and our broken German, we managed to convey why we were there, and seeming unable to help us, he nonetheless invited us in to eat. Then we saw him on the phone and grew a little concerned. Hmmm. Is he calling the police? The Swiss mafia?

Well, 10 minutes later, another guy walked in – the Italian had called his buddy. That buddy turned out to be the son of a niece of Jacinta’s. We talked to him in broken German, telling our story all over again. He then stepped out, and 10 minutes later, a woman (this new guy’s aunt) walked in with her young daughter. Jackpot! The woman was another one of Jacinta’s nieces! (Ok, now even I’m confused. They were all related, somehow, ok?) And this woman standing in front of us now lived upstairs where the former owners, Jacinta’s parents, used to reside! What a dang small world we live in.

Over plates of pasta and pizza, in what felt like your grandmother’s family-room-turned-dining-room for the extended family’s Thanksgiving gathering, we proceeded to have a big old-fashioned, juicy gossip session, stranger-to-stranger. Even the birthday party participants joined in.

In her broken English and our broken German, improved by a little bit of beer and with some occasional translation help from the birthday celebrants, we got the scoop on what happened to crazy Rebo, his wife, Jacinta, and the former owners.

[Not that you really care, but in short, Rebo and Jacinta eventually moved back to the States and divorced. He died, and Jacinta is still going strong. Meanwhile, her parents had continued to run the restaurant until finally selling it to the Italian guy just a few years ago. The cuisine options of the tiny, historical Swiss enclave of Dolmat/Ems had further diversified.]

What an evening. My husband couldn’t believe he had found his old haunt, and the memories flooded back.

Nonetheless, there finally came a point where we had to call it a night.

Next question: Where to sleep? It was by now almost 10 pm; both towns combined had populations of only 38,000, weren’t tourist draws, and roll up the sidewalks at dusk; so hotel options were limited. I got online on my phone as we drove and found one room. Just one. It was down a pedestrian mall and hard to find and then get to in the pitch dark and pouring rain. After many detours, we finally got to it, drenched, only to discover at the front desk that it was a room for three. After negotiating (ok, pleading) with the personality-free front desk guy – think night-desk stereotype + German rigidity – all four of us were allowed to stay in the room. It was in the attic. With one double bed, one twin bed and just enough floor space for one more body. And a bathroom down the hall. BUT for eight hours on short notice on a cold, rainy night, it was perfect.

Next Up: How Many Countries Can We See Today?

2 thoughts on “A Side Trip to Switzerland, an Old Haunt, and an Unexpected Forty-Year Reunion”